Our project region – the Dawna Tenasserim Landscape (DTL) - is an extensive, fascinating forest landscape, embedded in a mountainous region along the border between Thailand and Myanmar. It is home to one of the largest tiger populations and has the potential for much more. On approximately 130,000 km² (more than 50,000 square miles) there are more than 150 mammal species and almost 570 bird species, as well as many ethnic groups, that have inhabited these lands for centuries, living with and from nature. The so named Western Forest Complex on the Thai side is home to approximately 120 tigers, one of the most important and most likely enduring tiger populations on the Southeast Asian mainland.

While in the past few years the A World for Tigers Foundation together with the WWF enjoyed great success actively protecting tigers on the Thai side of this region, in 2017 we began to expand our activities on the other side, into Myanmar.

Since the tigers roam between the two countries, sustainable protection of the tigers is only viable when anti-poaching forces also show an increased presence in Myanmar. In Myanmar tiger numbers are low, although the habitats are largely still in very good condition and all prerequisties for a larger population are present. A tradition of poaching, ineffective criminal prosecution and a longstanding conflict between the Myanmar government and the Karen ethnic groups in this region have decimated the tiger population over the past decades. 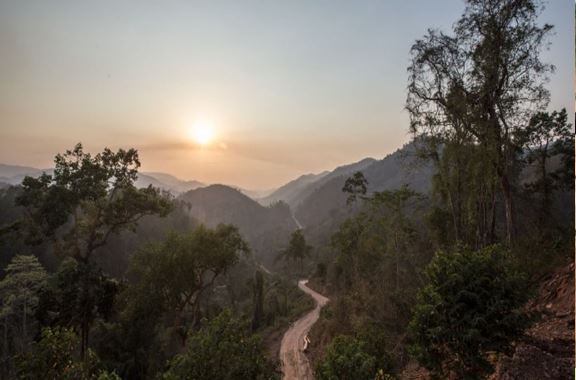 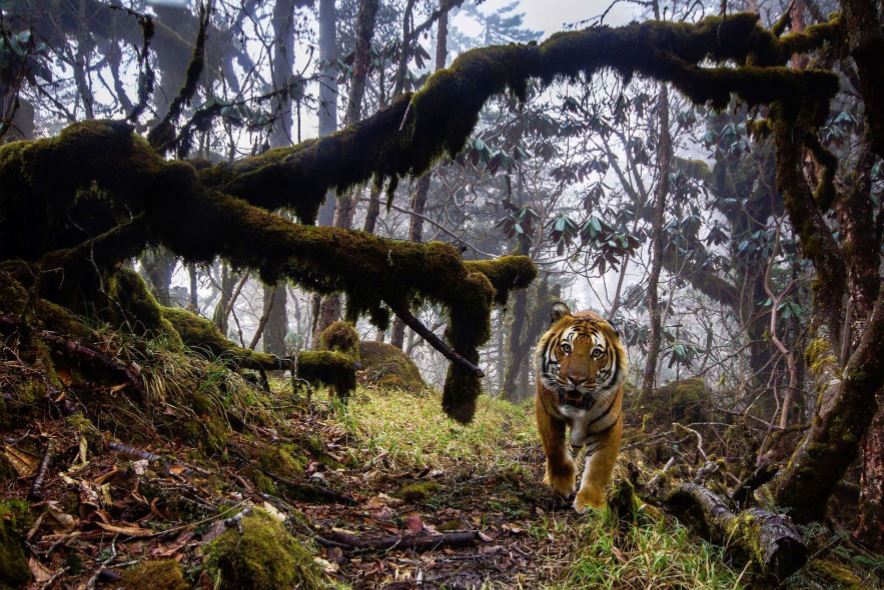 Myanmar's forests have great potential for larger tiger populations. (© WWF Myanmar)
As a result of Myanmar‘s recent opening of its politics and relations to the West and a recently enacted cease fire with the Karen peoples, there is a historic opportunity to protect tigers in Myanmar and to increase their numbers. To do so, training and equipping of field rangers must be conducted, ranger stations are needed, and naturally awareness education of local communities in this region is needed to ensure long term sustainability for the program.
After the first ranger station was built in eastern Myanmar last year, this year with the help of supporters of A World for Tigers Foundation a second ranger station could be established in the West. Both ranger stations enable field rangers to protect a greatly enlarged portion of the region. 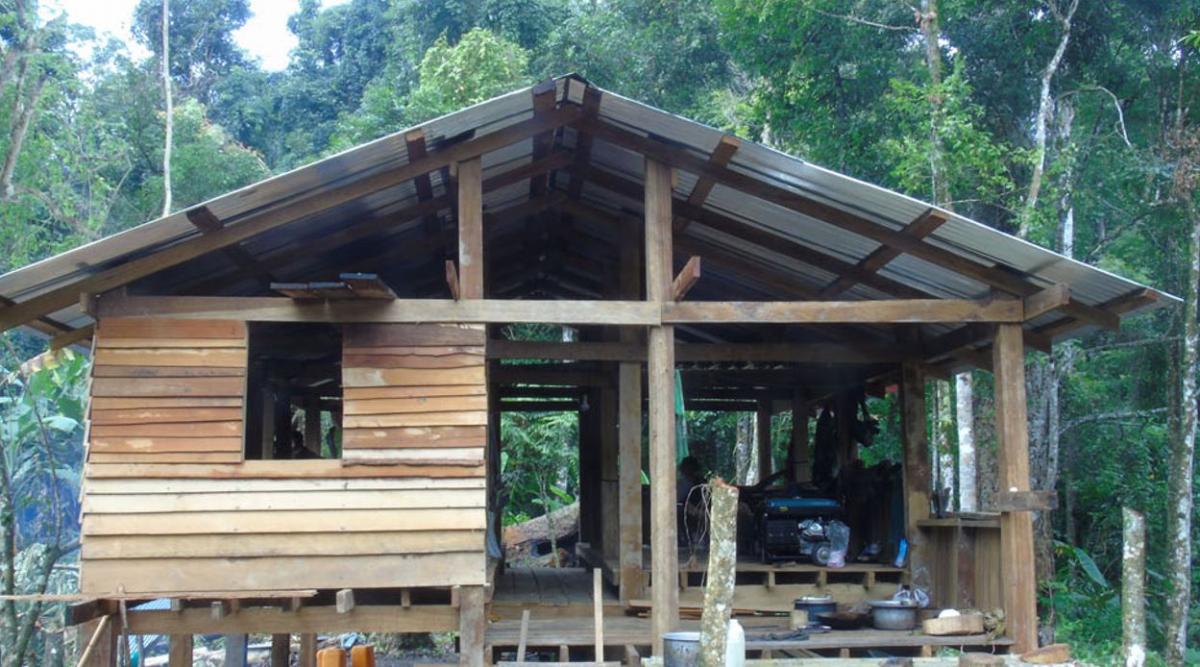 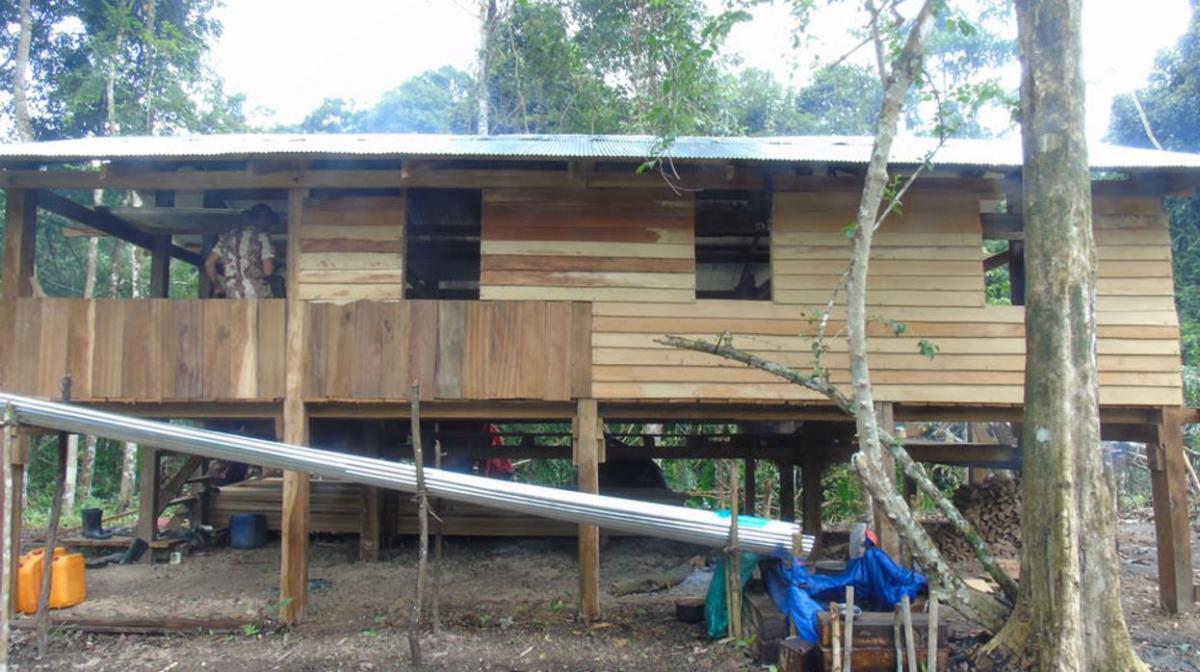 To provide field rangers of the Karen Forest Departments the necessary knowledge, that they require for their daily work in the jungle and that is required to employ them as trained Wildlife Protection Units, a training camp was conducted in May by experienced representatives of the African Field Ranger Training Services Division. Training included not only practical exercises but also theory on effectively conducting patrols, self-defense, apprehending and arresting poachers, as well as map reading and proper use of GPS equipment.

For the trainees, special highlights of the training included practical exercises, in which they were trained on various types of camouflage and diverse techniques for approaching and arresting poachers. Participants also acknowledged the importance of well-planned tactical patrols as fundamental for the successful work of a ranger. In theoretical training, participants discussed roles and responsibilities of field rangers as an enforcer of the law as well as their function leading by example in all aspects of environmental protection that they serve for all their fellow human counterparts.

The training was a great success and all participants graduated despite extreme weather conditions with high enthusiasm and professionalism, so that the newly formed Wildlife Protection Unit could assume all its duties at training completion. 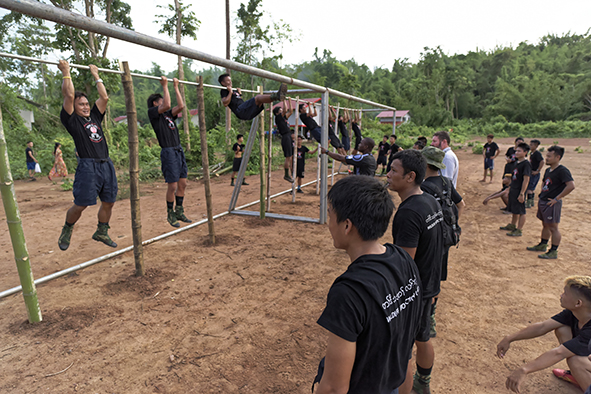 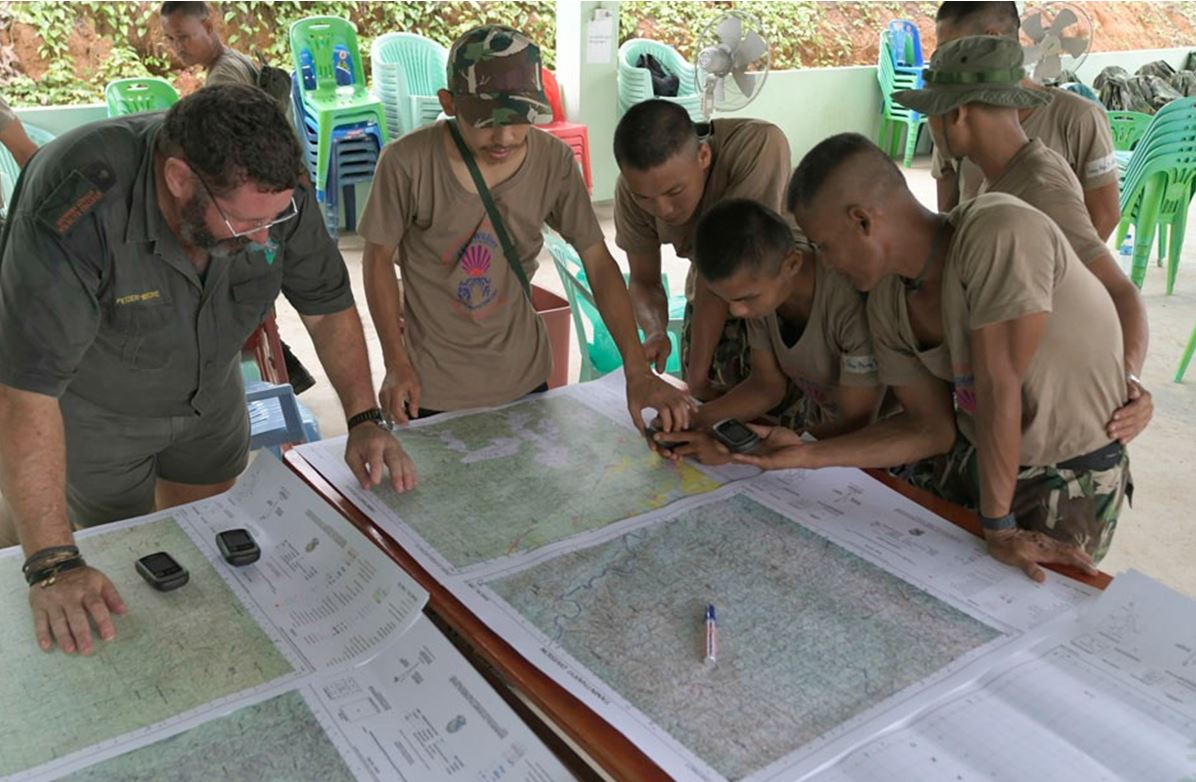 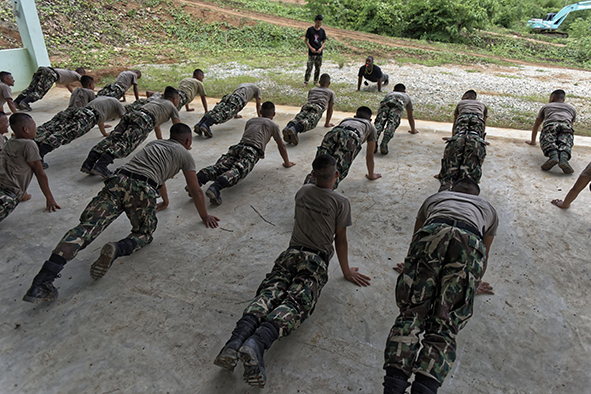 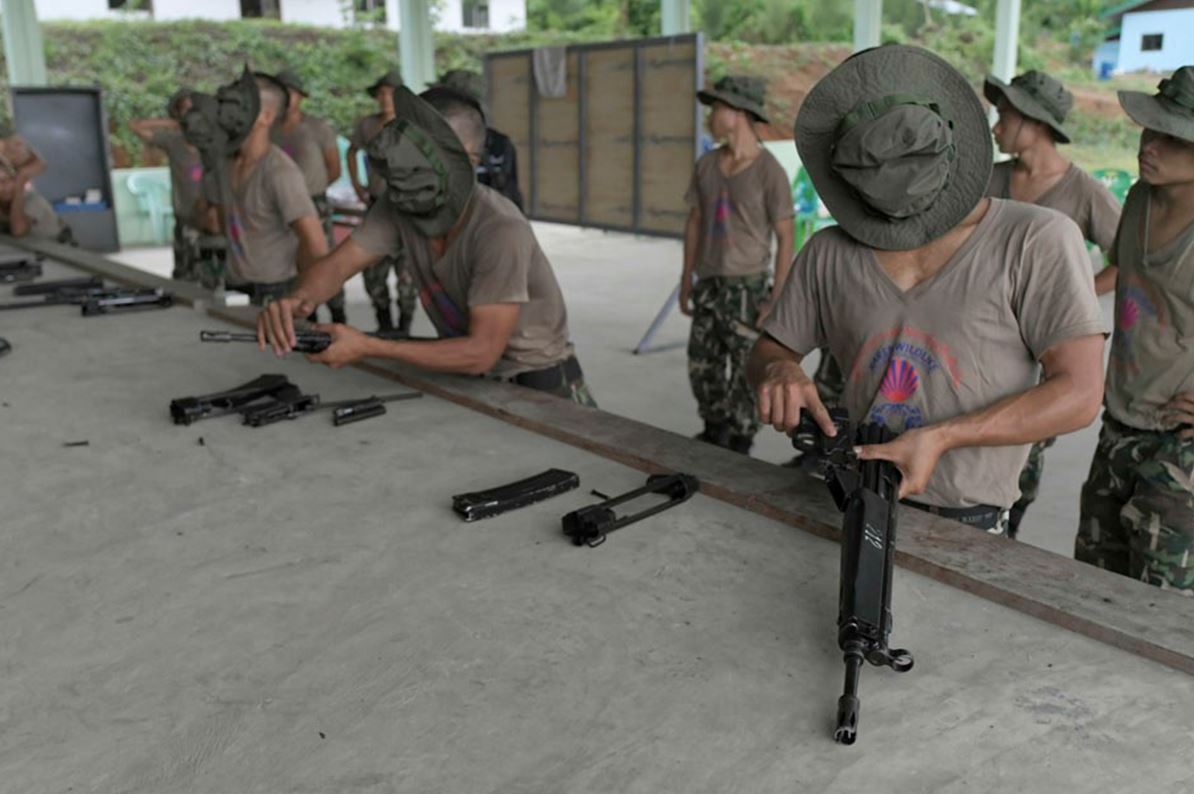 Training camp of a Wildlife Protection Unit, May 2017 (© KWCI)

Conducting this training camp and the constructon of both ranger stations are the first important milestones providing Karen communities this type of assistance and infrastructure, enabling them to actively protect wildlife and their forests.  In order to establish enduring and sustainable animal protection programs in Myanmar, we must also promote expansion of the infrastructure and support in the coming years. 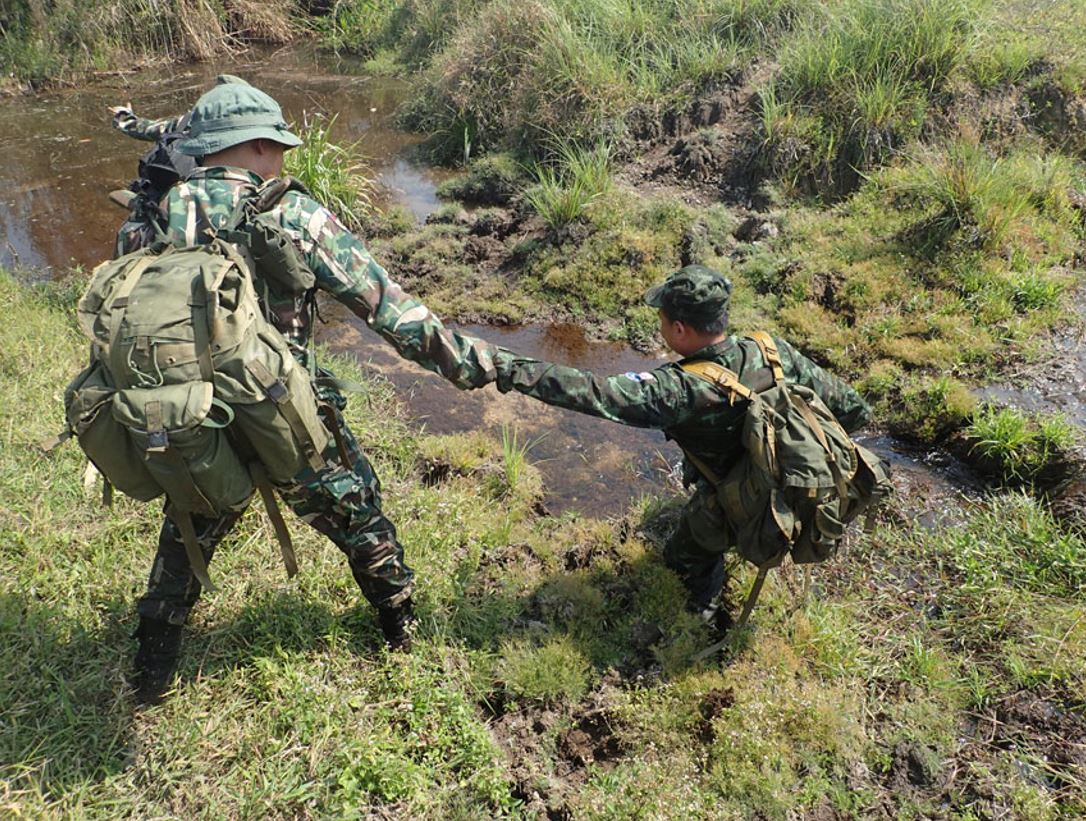 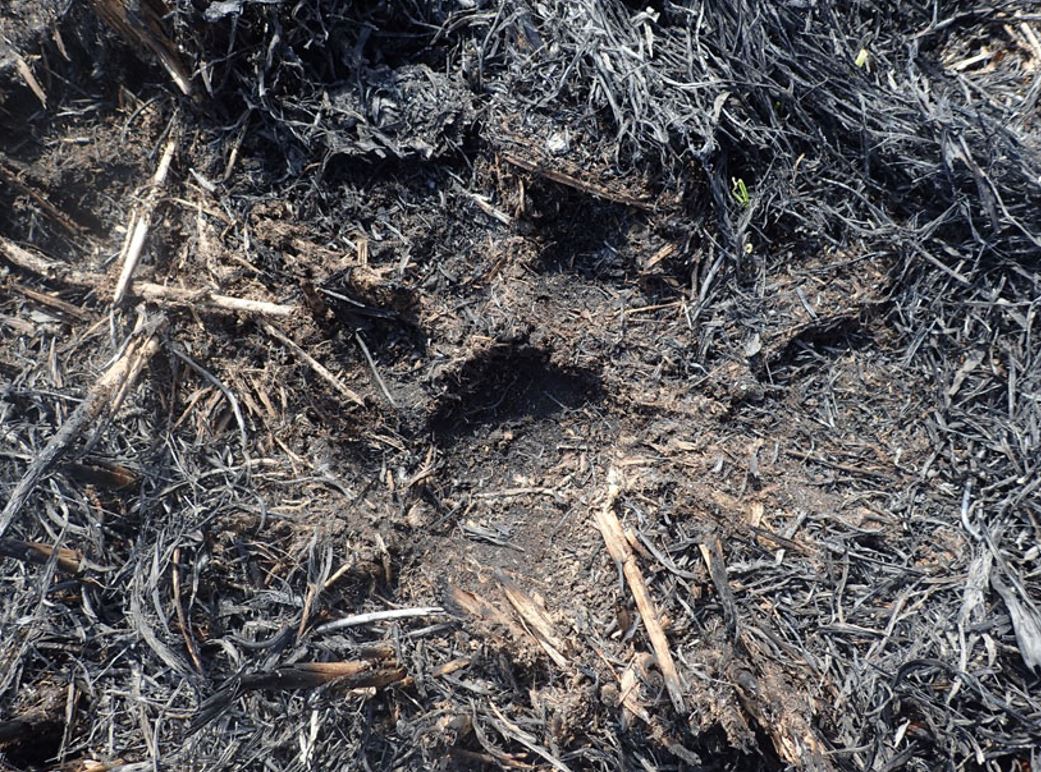 We also have much exciting news to report from our Thai project region! Six newborn tiger babies were recently photographed by camera traps in the Mae Wong and Khlong Lan National Parks, so that the total number of tigers in the National Parks increased from 10 to 16. With a total 164 camera traps in 82 locations in the park the number and distribution of the tigers and their prey can be documented. Assessments of the camera traps confirm that the number of female tigers is increasing annually by 25% on average and that the number of cubs has doubled since the last tiger census. This positive trend is a clear indication that the tiger population in Thailand is recovering. Still, despite a high rate of survival of the female animals and an increased number of cubs, the reproduction rate per female compared with other regions is still too low. Currently the rate is approximatley 0.813 cubs per female per year, compared to up to 1.35 cubs in regions with higher prey density. 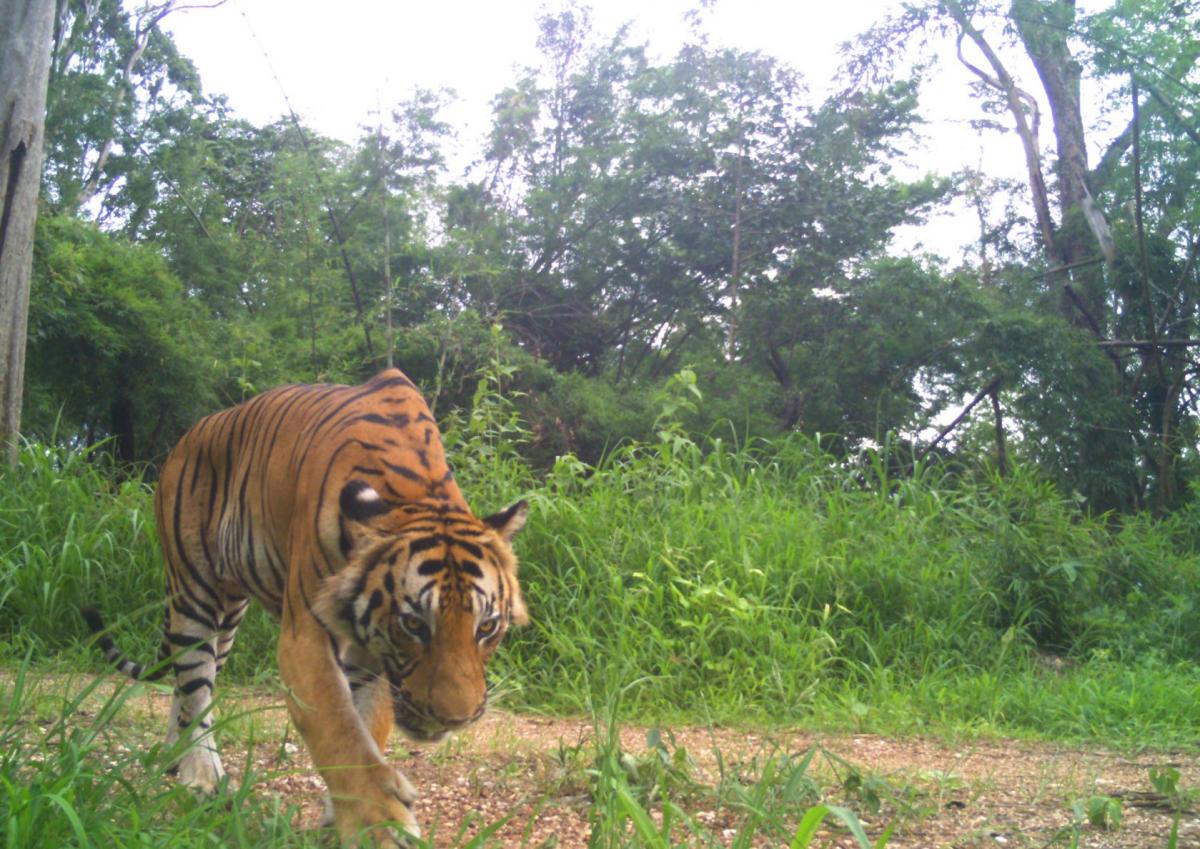 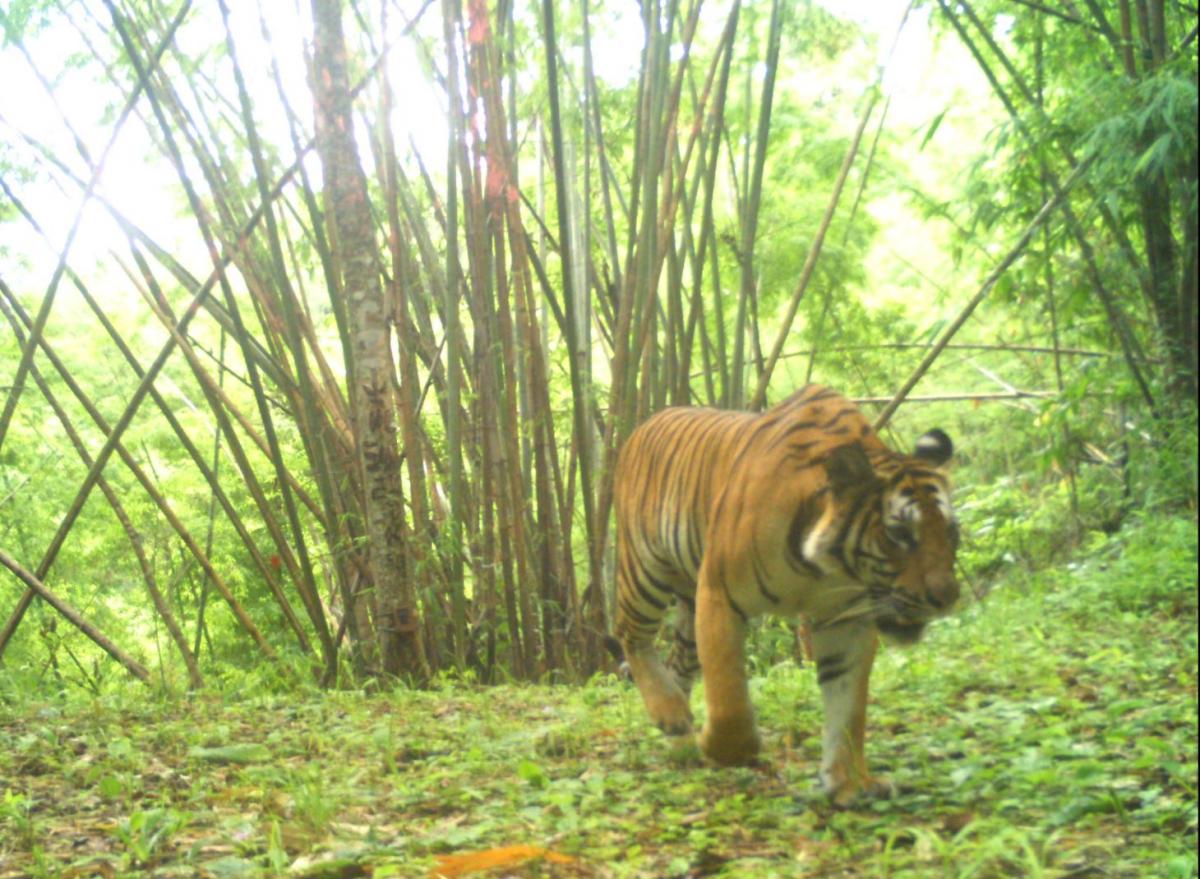 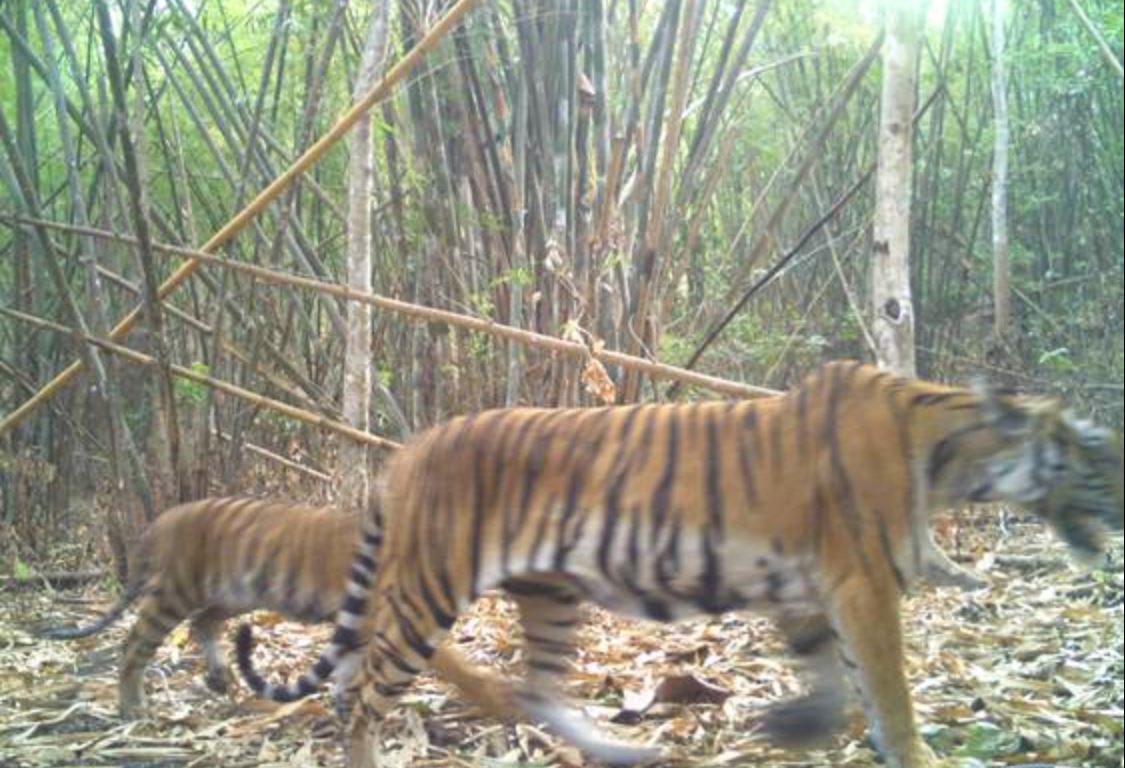 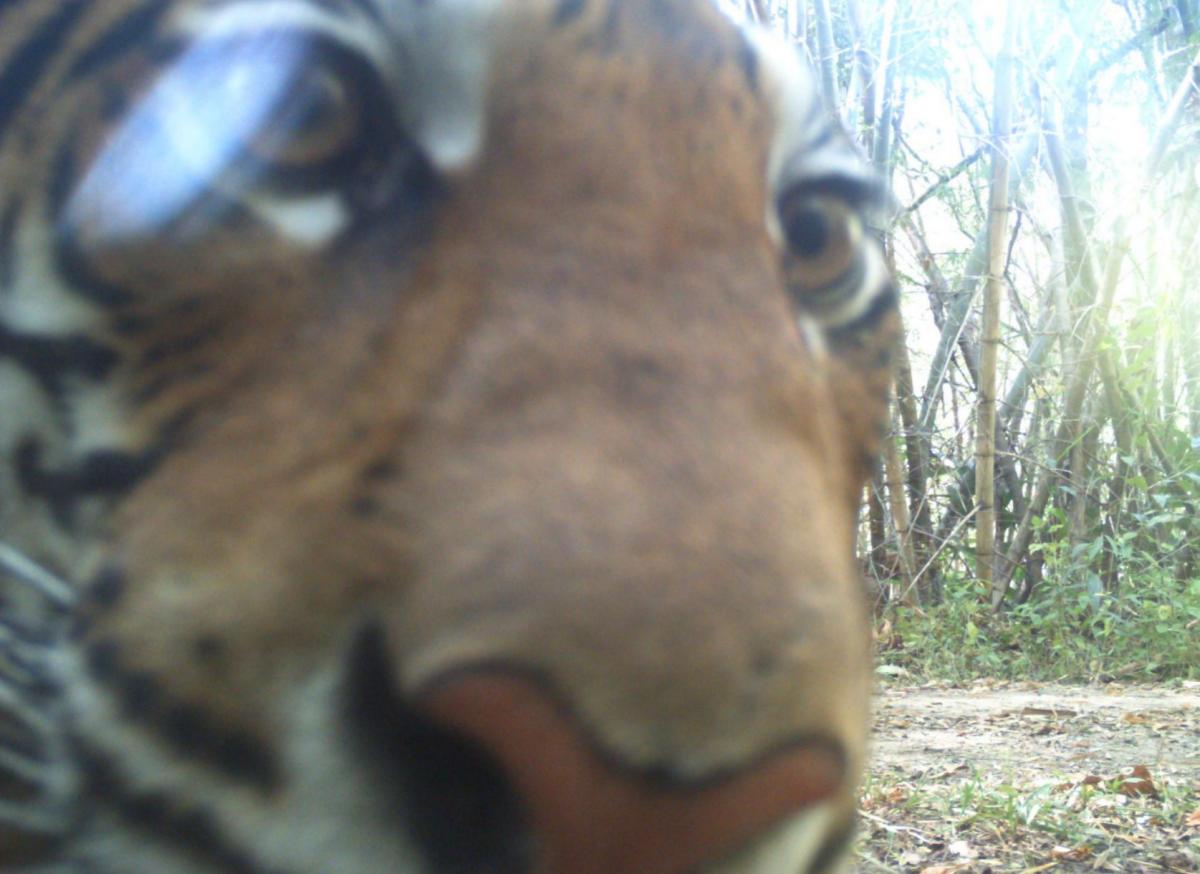 So that this positive development in the tiger poulation can continue in the coming years, two factors are essential:

In order to protect the animals against poachers, field rangers of Mae Wong and Khlong Lan National Parks were on patrol an average 20 days per month last year. Illegal camps and trespassers in the parks are still the greatest dangers that could be identified during patrols. Also, additional training camps were conducted last year.  50 field rangers were trained by local Border Patrol Police and Provincial Police on conducting patrols, locating and arresting suspects, using firearms and navigating terrain. 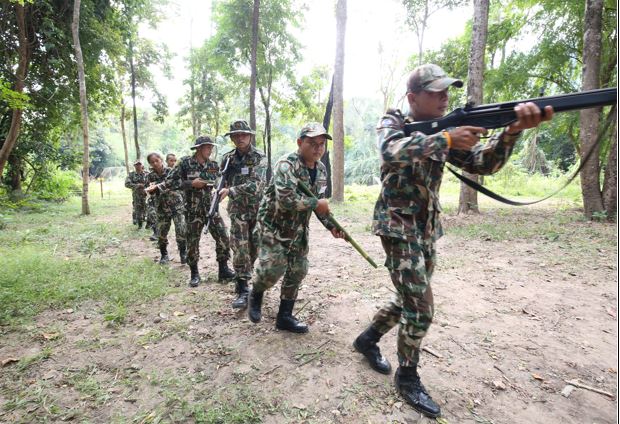 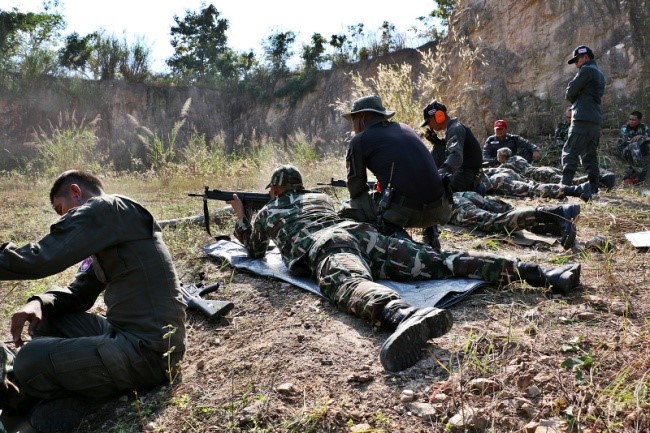 „Tiger Youth Camps“ were again conducted to educate young generations continually on the important topics of environmental and wildlife protection of their homeland. 115 school aged students learned the importance of intact ecosystems and how vital it is to protect animals living in the wild, such as tigers. 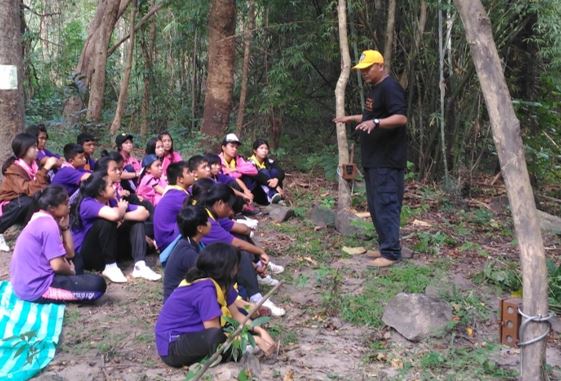 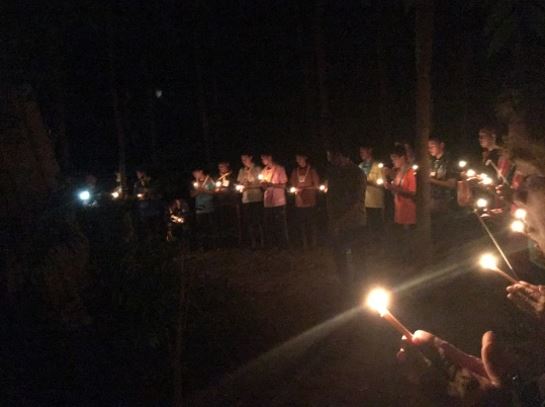 School aged students learn about camera traps and make a pledge to protect wildlife, such as tigers (© DNP & WWF Thailand)

With all this good news that confirms that the tiger protection program in Thailand and Myanmar provide a solid path to success, yet knowedgeable of the tasks and challenges that still lie before us, we now gratefully thank all our tiger friends and all our loyal supporters! Without you, all this progress would not be possible! Also on behalf of the Indochinese tiger a “Thank you,“ from the bottom of our hearts!