The year 2018 began for us with a visit* to our project region, the Khlong Lan and Mae Wong National Parks in Thailand’s Dawna Tenasserim territory. The occasion for this visit was not only to assess the current tiger protection situation and to discuss planned activities on site, but also to make the personal acquaintance of the people who make protecting tigers a reality: our park wardens.

Some have been active in protecting tigers for more than 20 years and report passionately that they can imagine doing nothing other than protecting these forests and their wildlife. Although they are often separated from their families for months at a time, fall ill to malaria on average once annually, and are threatened potentially with their lives with each discovery of poachers, they are the steadfast and passionate protectors of their home. Asked whether they ever personally encountered a tiger on their daily patrols through the forest, most respond that they haven’t. One of the wardens, who has practiced his profession for more than 27 years, reported that he once encountered this wonderful and shy animal. During the nightly establishment of a camp, the animal suddenly appeared in the nearby bush and curiously observed the warden and his colleagues. The tiger was an adolescent who had never before encountered humans, and disappeared just as suddenly as he had appeared. Even though such chance meetings can be very scary, our warden testified that this was a magical moment in his life, something he won’t ever forget. 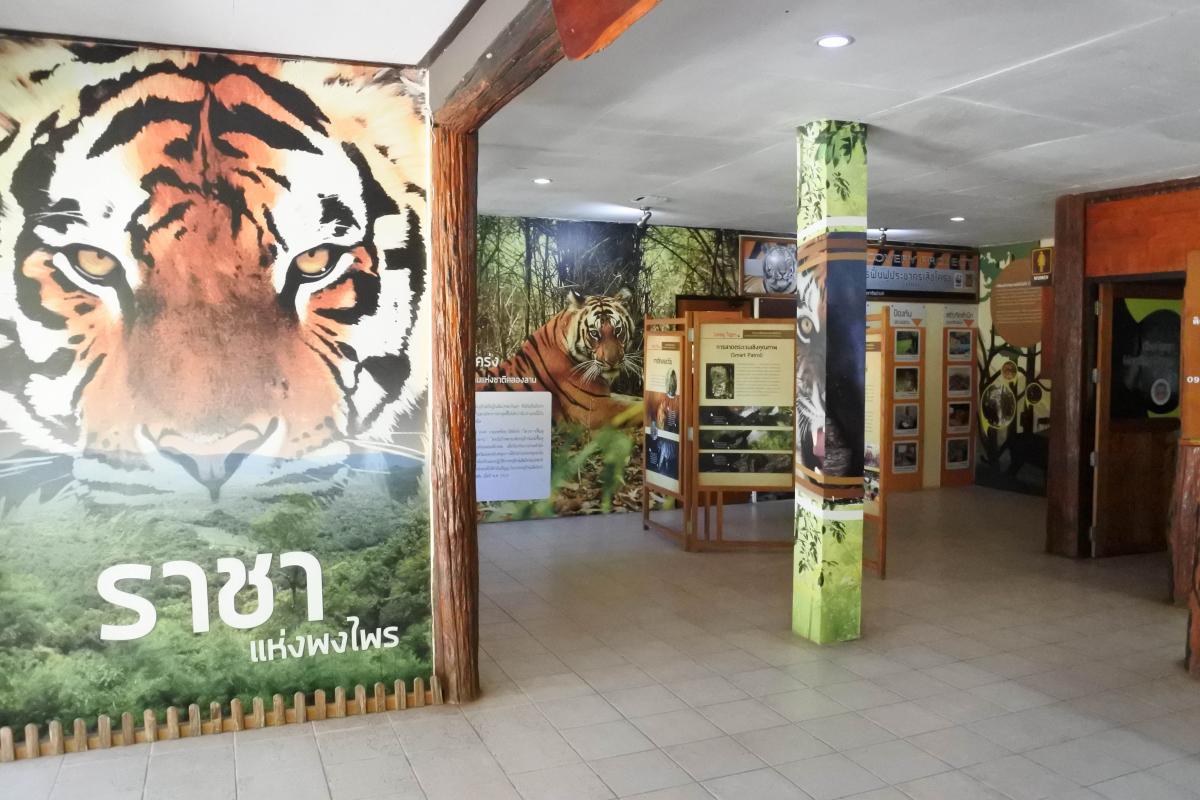 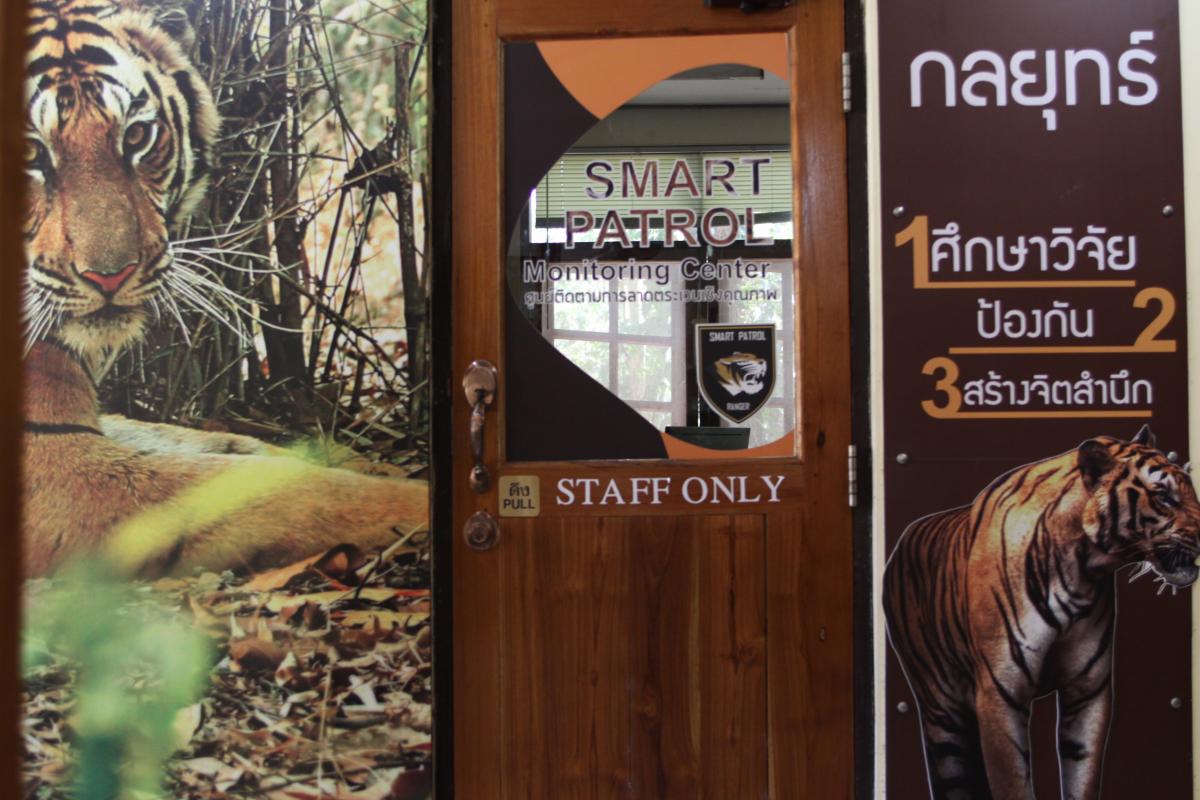 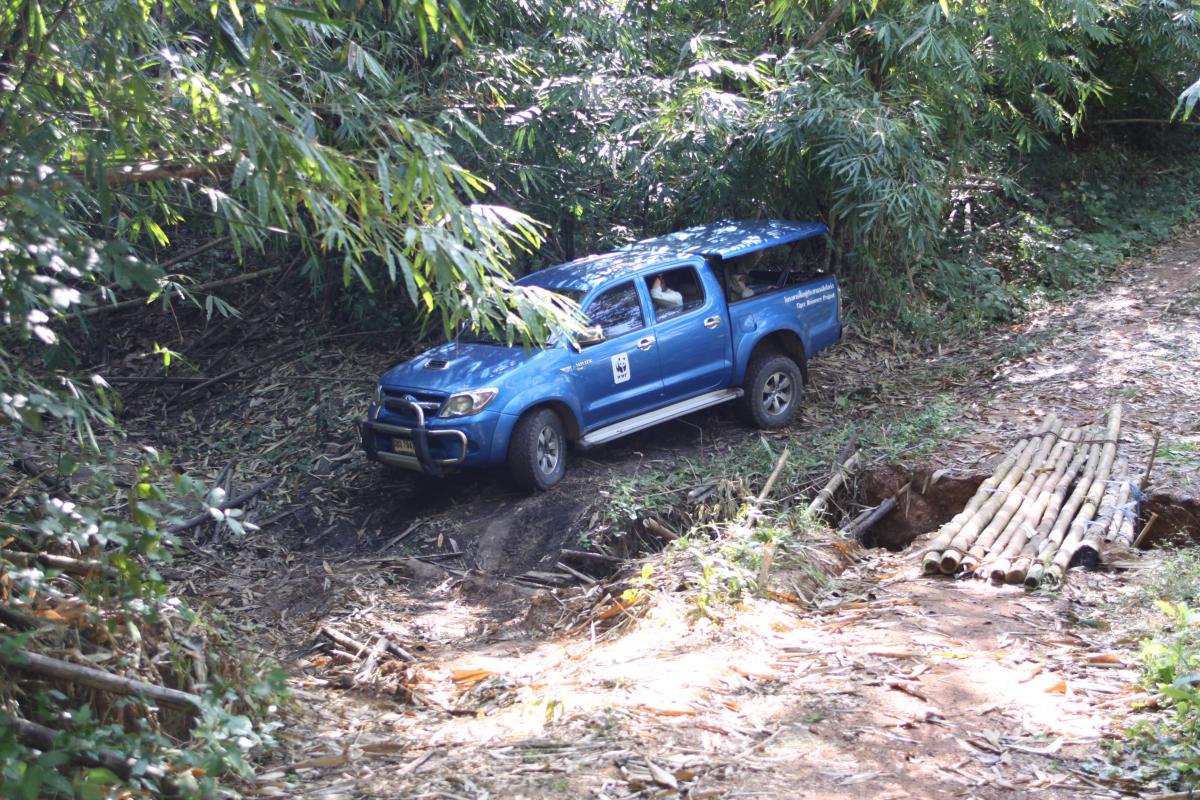 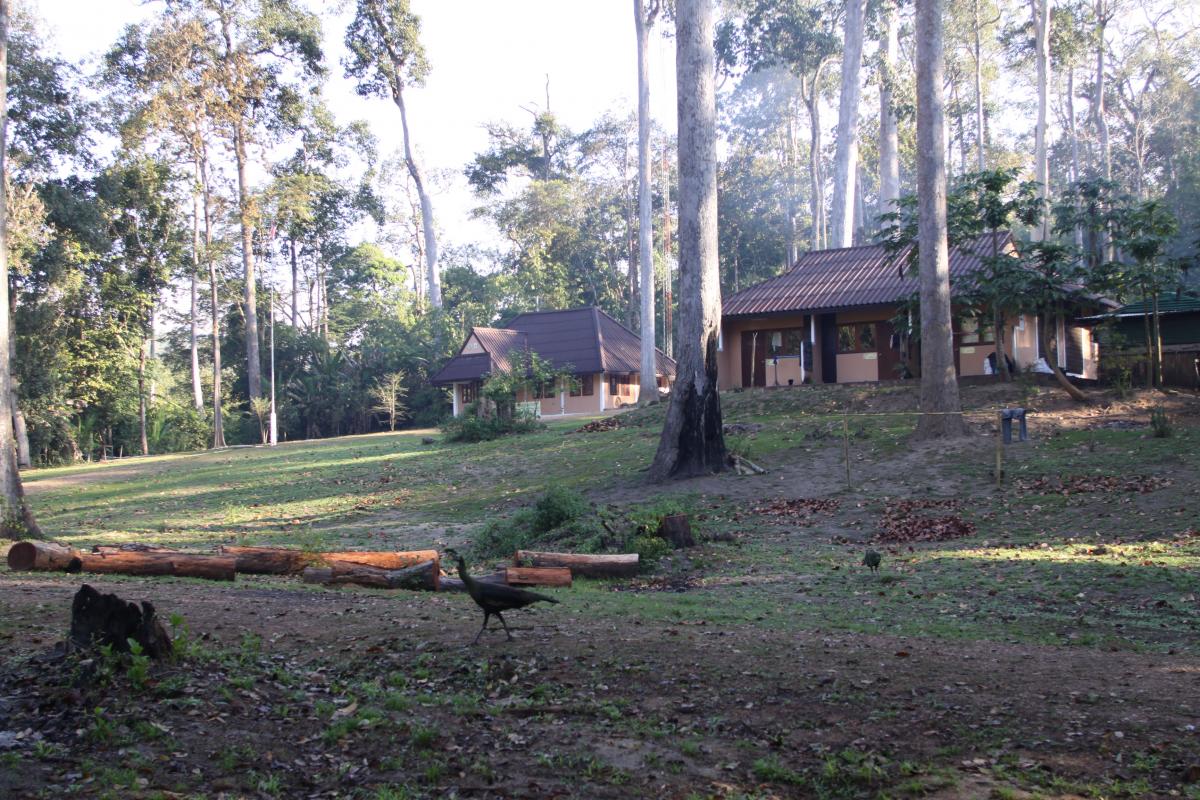 Visiting the Mae Krasa Ranger Station, built in 2015 with help from the A World for Tigers Foundation (© all photos private)

With approximately 100 wardens, patrols are conducted in the national parks region on average 25 days per month, traveling a total of more than 8,000 KM annually. Through the Mae Krasa warden station, financed in part by the A World for Tigers Foundation, the area wardens can overwatch and safeguard has grown even larger. In addition to protecting tigers during their patrols, they are also able to protect other endangered species, such as elephants, gaurs (the world’s largest cow) and tapirs. 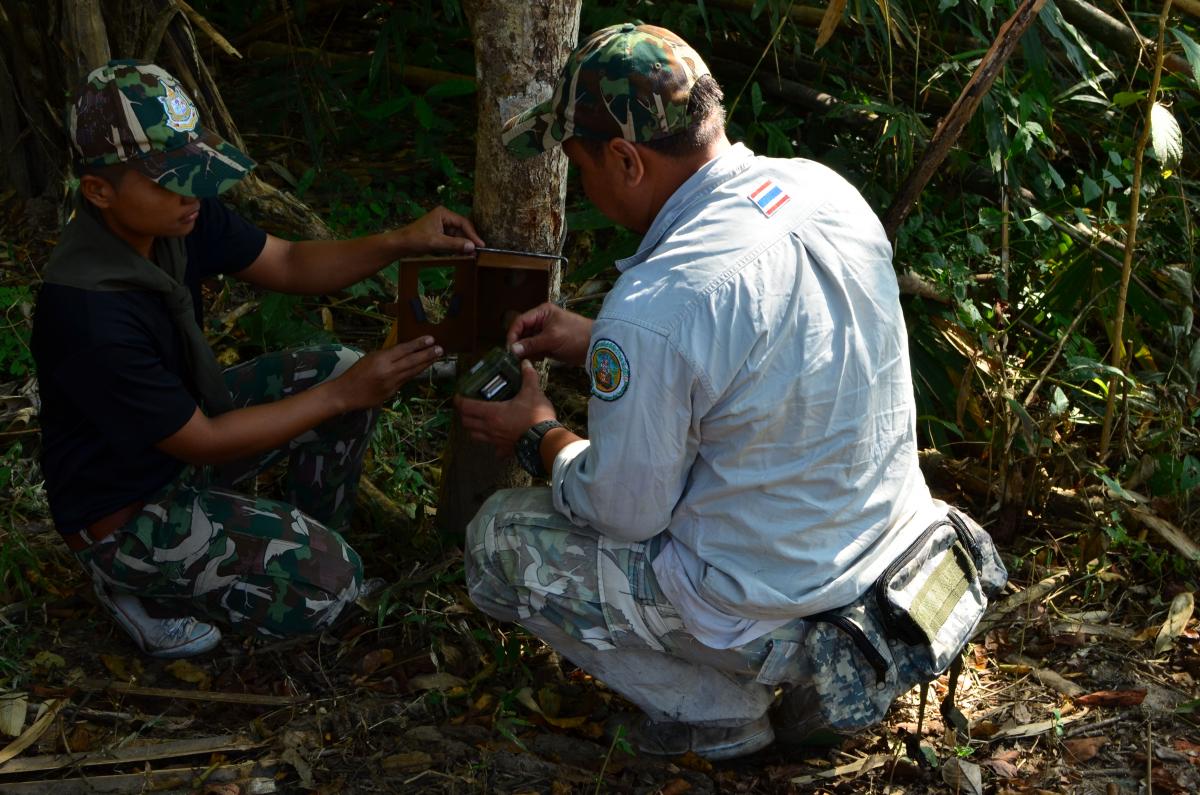 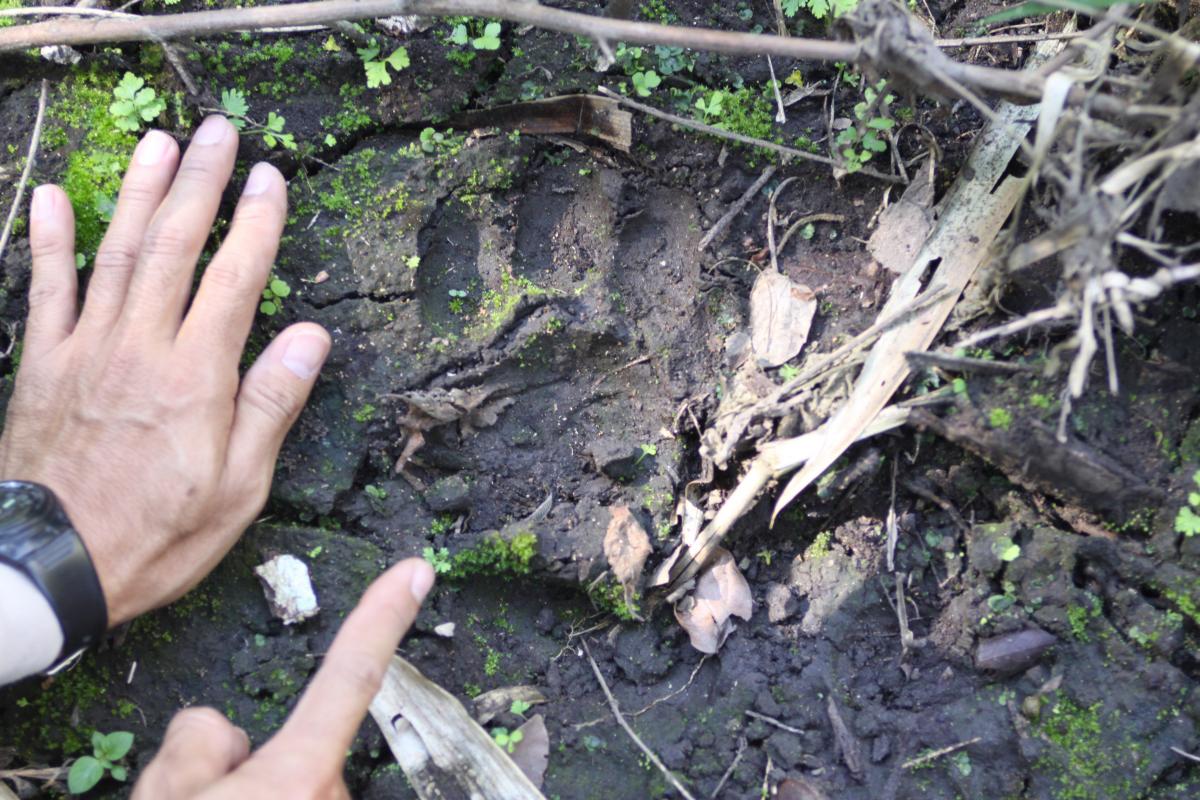 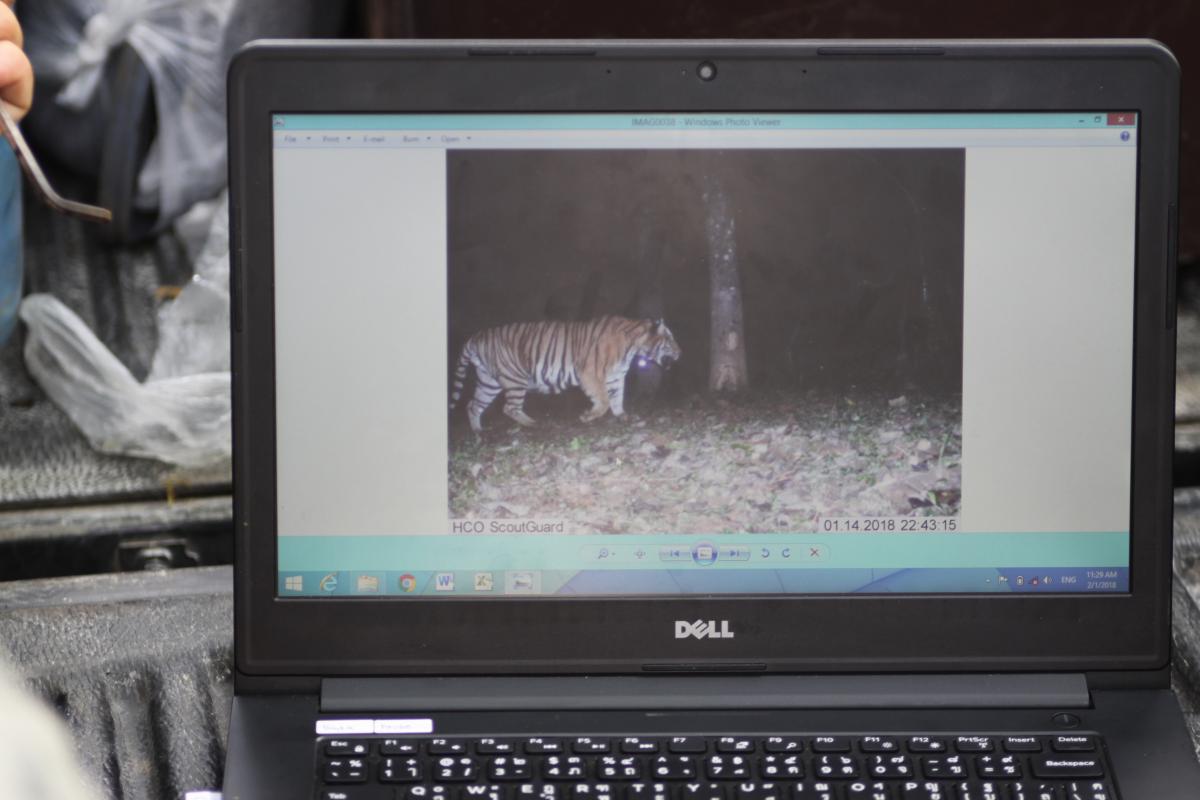 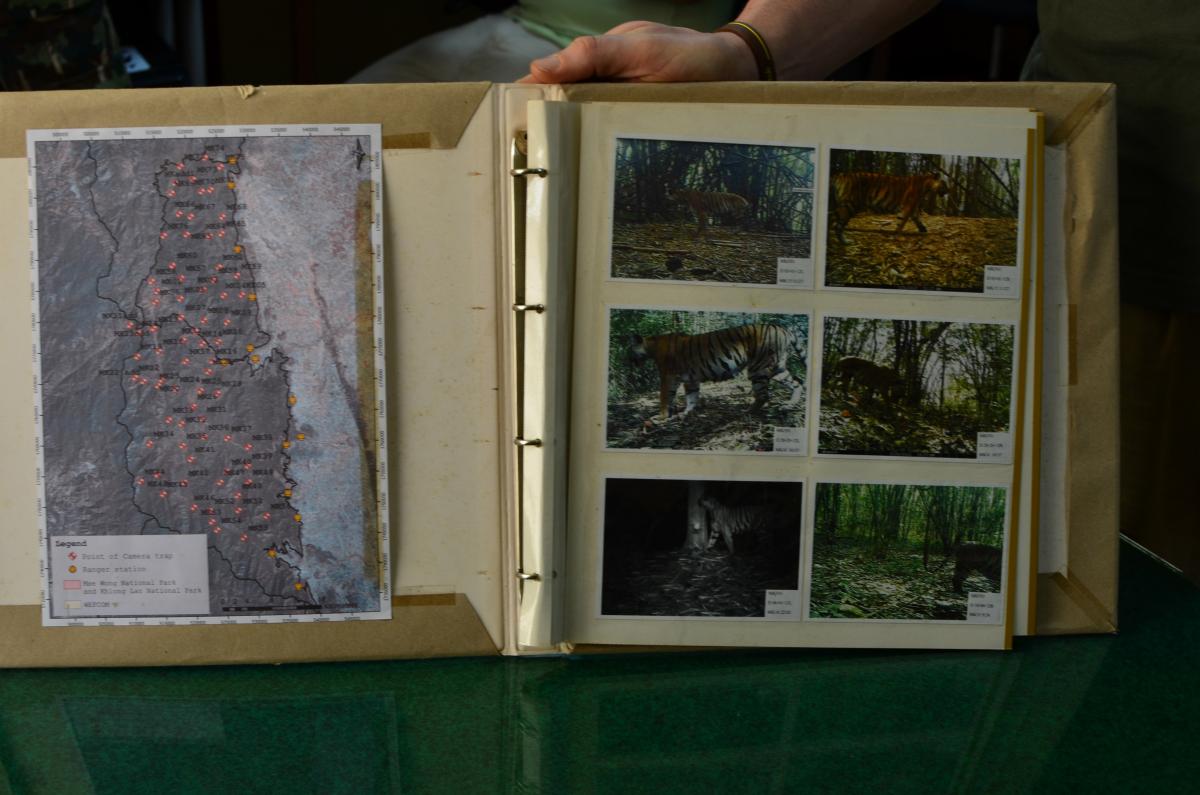 The past year reconfirms that their work in the region bears fruit. Similar to previous years, based on the wardens’ tireless efforts, not a single animal was killed! The results of this year’s tiger census support that the tiger population in this region remains stable and compared to the census completed two years ago, has even increased slightly. The total 165 camera traps, installed at 82 different locations, photographed sixteen animals, of which 6 are female, 4 male and 6 cubs in both Mae Wong and Khlong Lan National Parks. 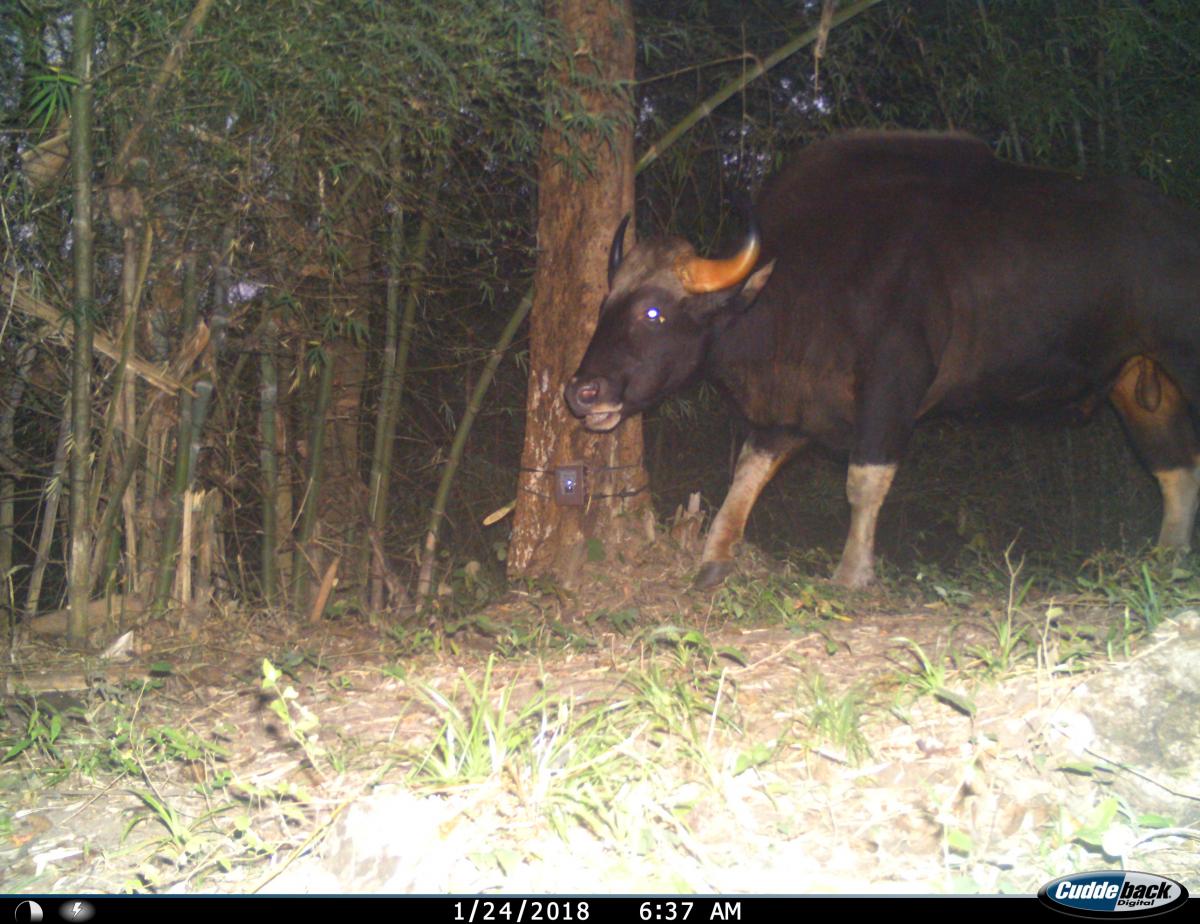 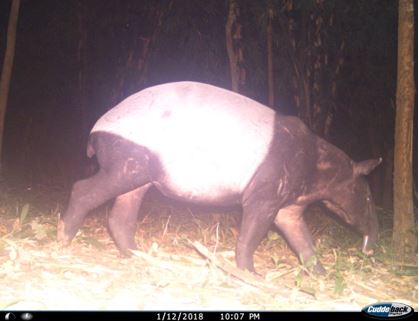 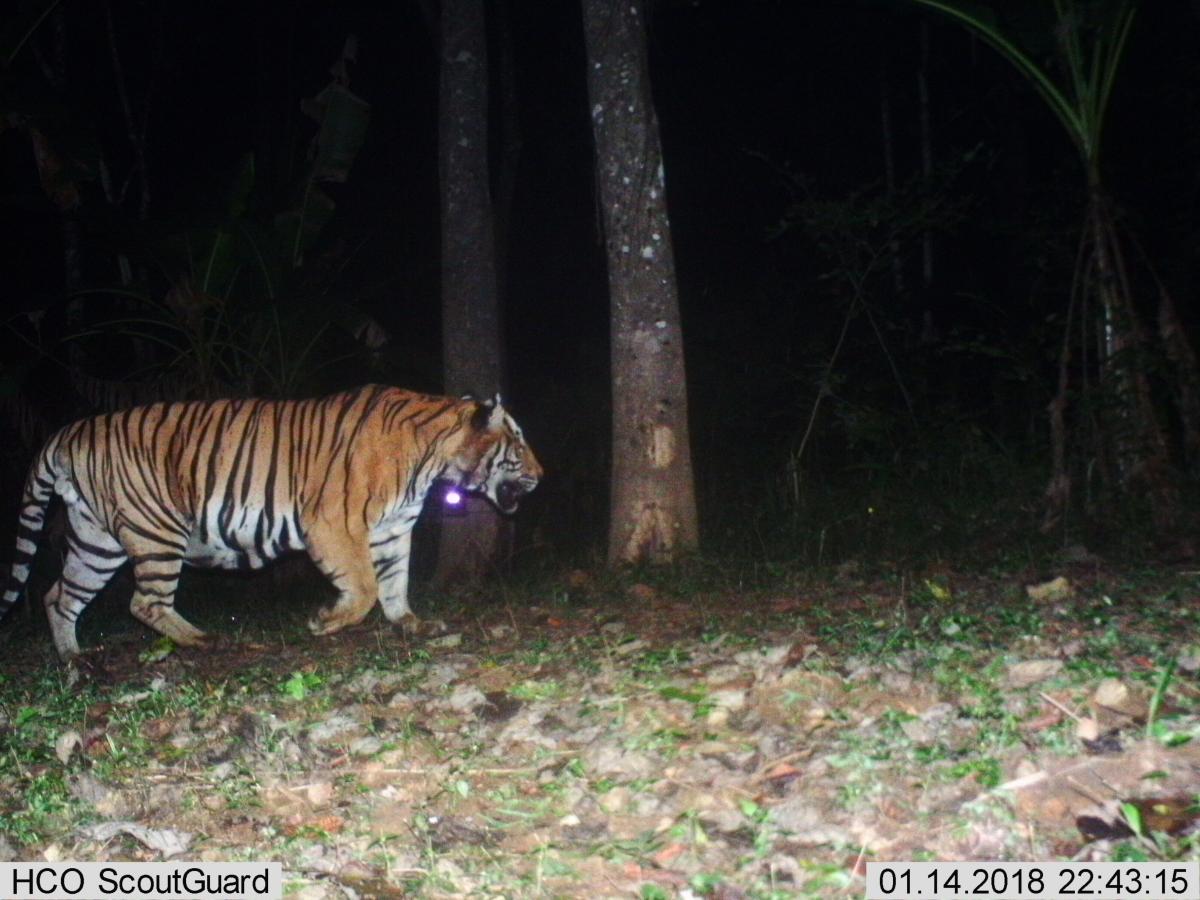 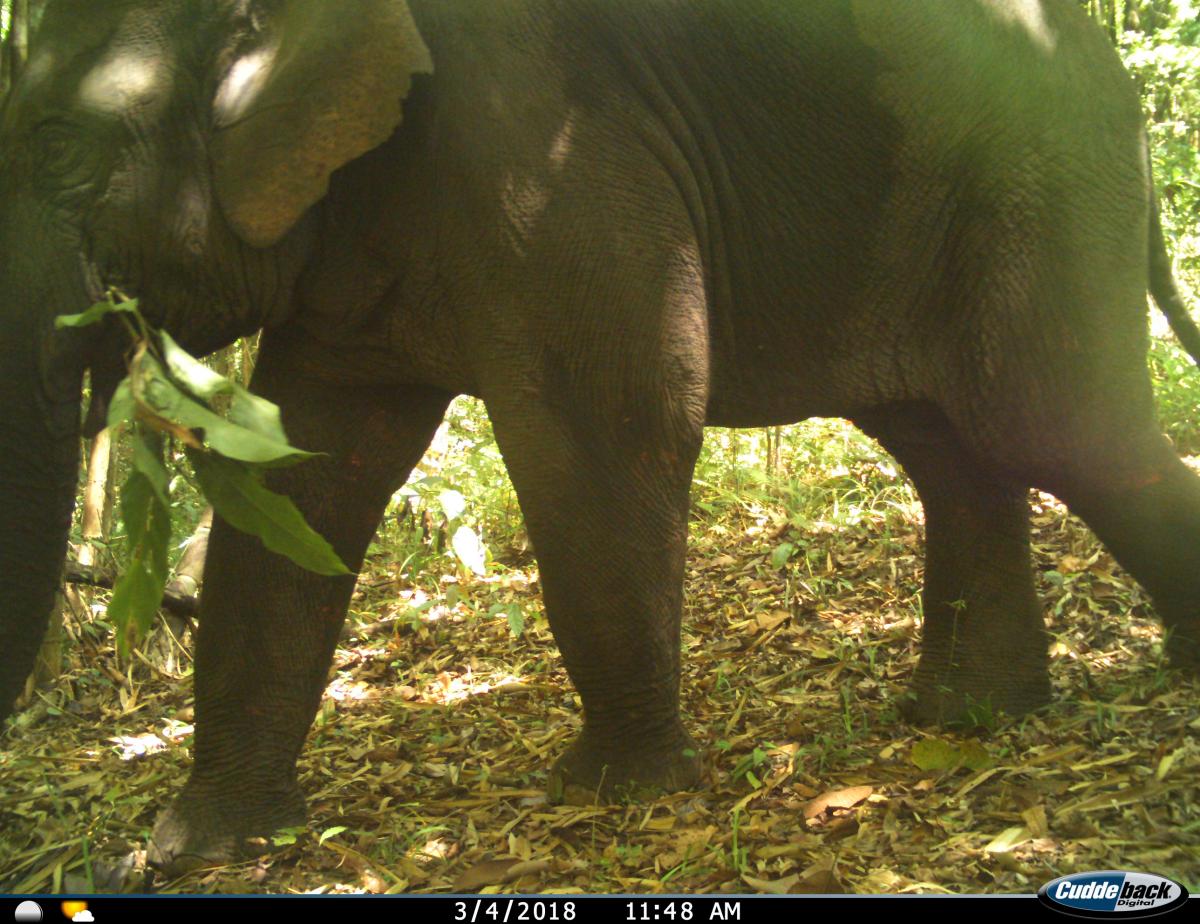 As much as these results are positive and show us that active tiger protection functions well through the comprehensive warden program, the numbers also underscore that the number of prey animals is still too low, which subsequently prevents a significant increase in tigers.

The wardens report that poaching remains the greatest threat of all illegal activities in the forest. Endangered species such as the tiger are no longer the only ones threated by poachers, but rather also their prey, such as samba deer and bantengs (wild cows), that are offered as a “bush meat” specialties by local restaurants. The ever-decreasing number of prey has dramatic consequences. First, the tiger propagation rate of approximately 0.813 cubs per female per year is significantly lower than the rate found in areas with more prey density, 1.35 cubs per female per year. Also, the survival rate of cubs is only 50%. They have not yet developed effective hunting abilities and are especially impacted by the decrease in prey.

In order to significantly increase the number of tigers, the following main measures must be implemented in our program:

In order better to protect tiger prey in the future, numerous training camps were conducted at which new wardens received basic training and where experienced wardens were trained on new tactics and techniques enabling more efficient defense against poachers. 35 new wardens were trained in a “SMART Patrol Training” on how to conduct patrols, detecting and arresting suspects, weapons handling and terrain navigation/orienteering. For 65 wardens who had already completed basic training, refresher training was conducted. In addition, a one-week “SMART Patrol Training Intelligence Course” was conducted for 30 experienced team leaders. At this specialized anti-poaching training camp, wardens were provided new techniques in area overwatch and intelligence reporting, that enable a more efficient approach against poachers.

Especially in overwatch techniques, new methods are implemented that enable a significantly enhanced protection of the forests and their wildlife. With cameras that enable real-time photos and videos, poachers can be identified early and before they have a chance to conduct illegal activities. The cameras are being installed on sanctuary boundaries so that poachers are captured as soon as they enter the parks. Camera-linked software-based radios then provide the wardens with the photos and videos on their cell phones. In this way, the wardens are enabled to deploy immediately and directly where they are needed.

Just as important as fundamental warden training are awareness campaigns at universities, schools and local villages. Since tigers represent hope for the future environmental- and wildlife-conservation in their country, tiger protection courses were offered to students and schoolchildren.

In a three-day “Tiger Youth Camp” 130 schoolchildren aging 9 to 11 years old were instructed on the importance of intact ecosystems and the protection of endangered species such as the tiger. In addition to the important topics of environmental and species conservation, 115 forestry students from the University of Kasetsart Forestry faculty also learned basic warden skills in three 1-week training camps. This training provides them with more opportunities in their later career path and simultaneously helps build a foundation for the future of Thailand’s environmental and wildlife conservation. 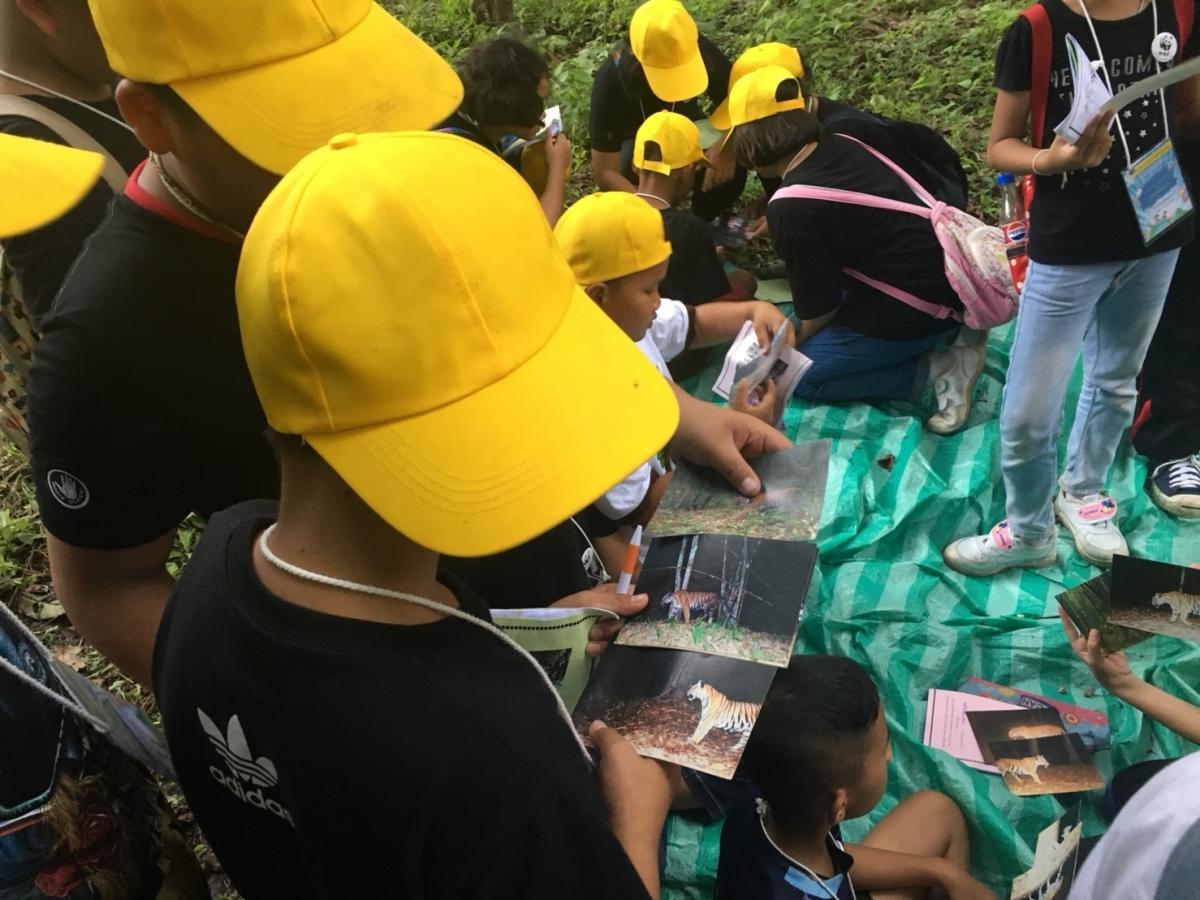 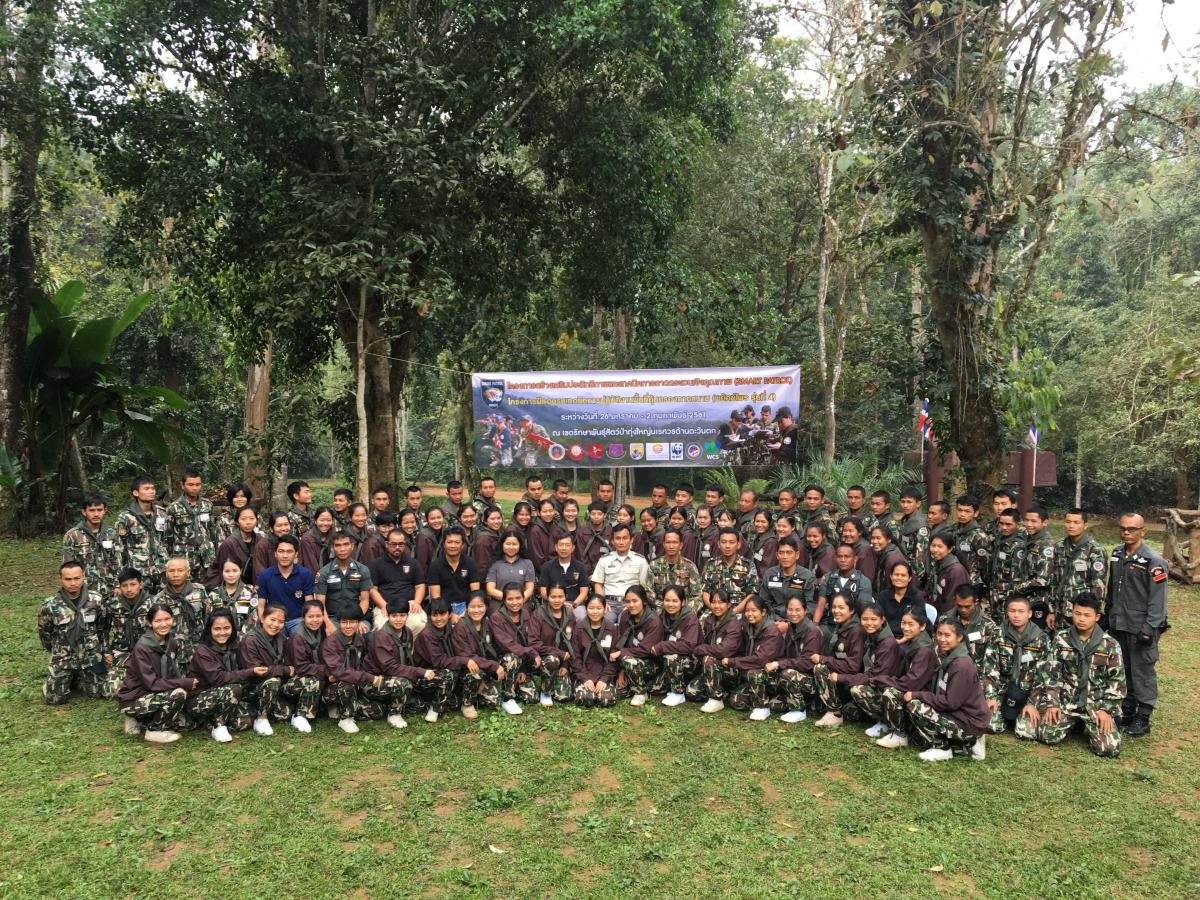 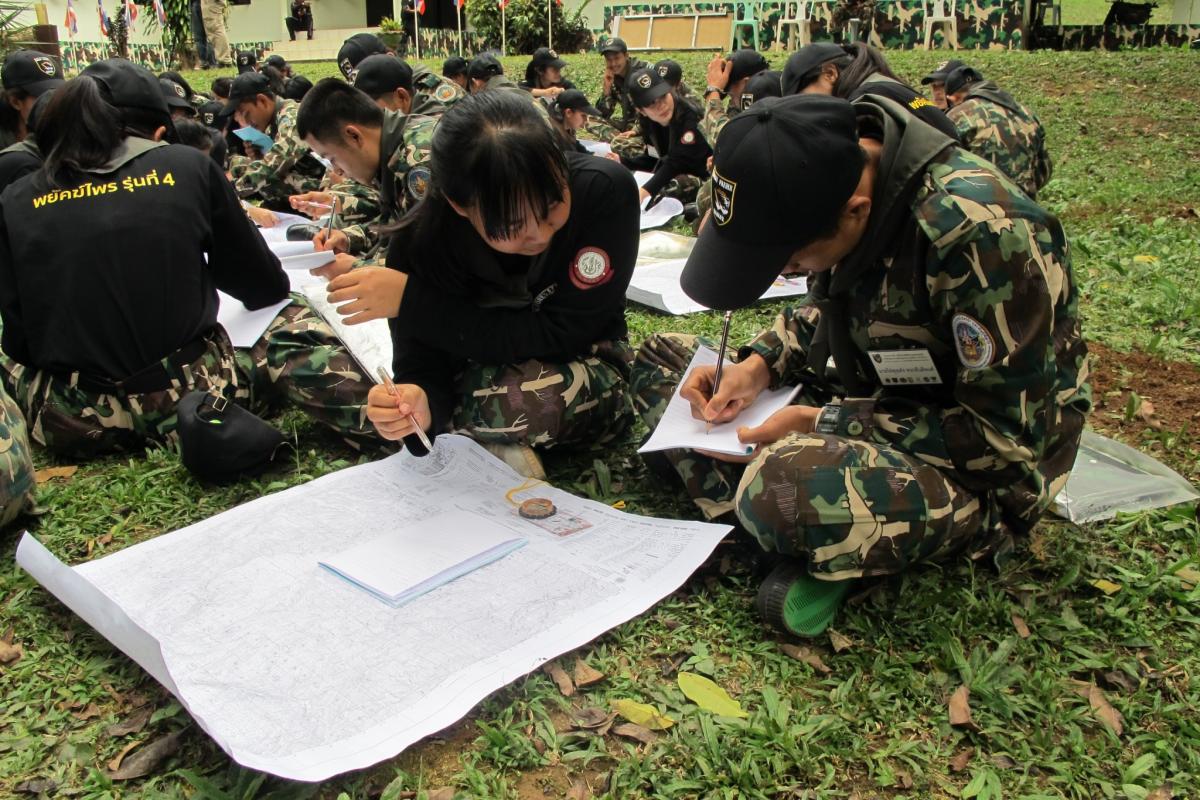 As part of regularly occurring progressive training in tiger and species conservation for the local population, several of the schools and villages bordering the national parks were visited. During these visits, the importance of tiger and species conservation was conveyed to the local populations. To protect the tiger habitat also mans to guarantee ground water security, to reduce effects of climate change and to provide for clean air, medicinal plants and sustainable jobs.

In total, 1,050 villagers and 390 schoolchildren participated in the presentations and activities, with the hope that lessons learned will also be transferred to friends and families. 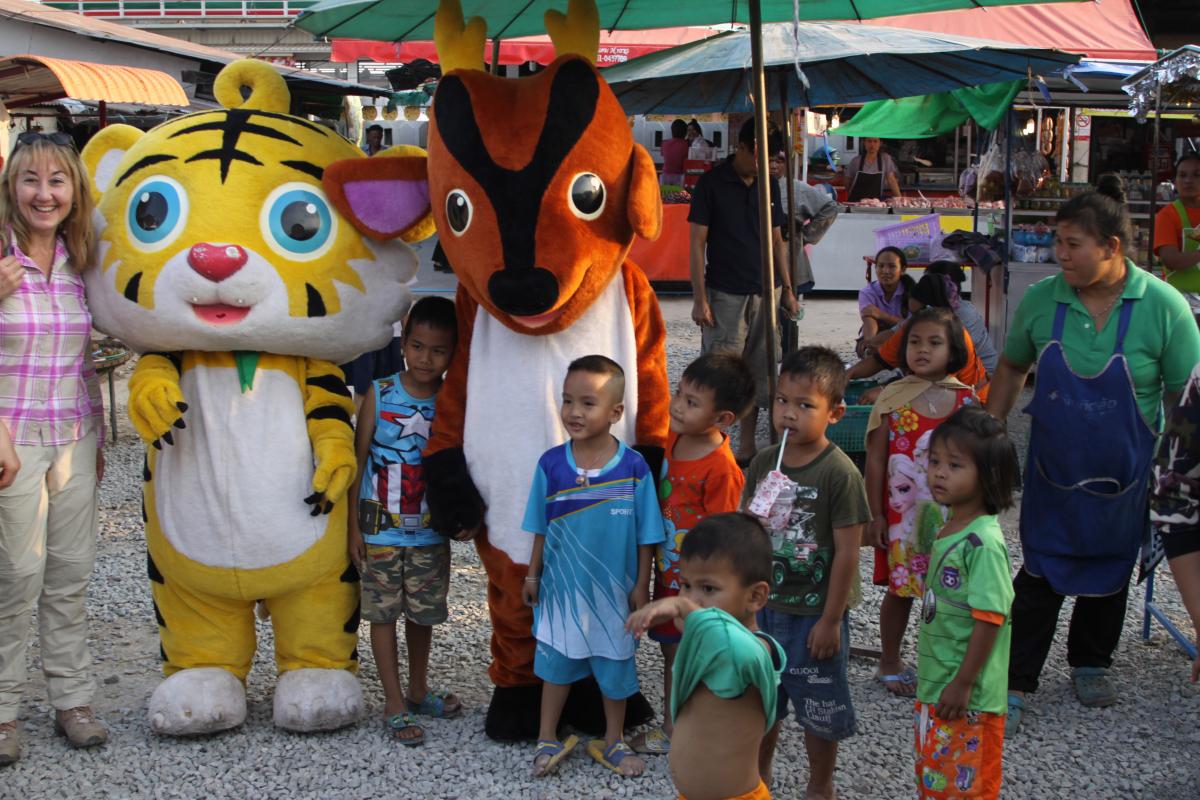 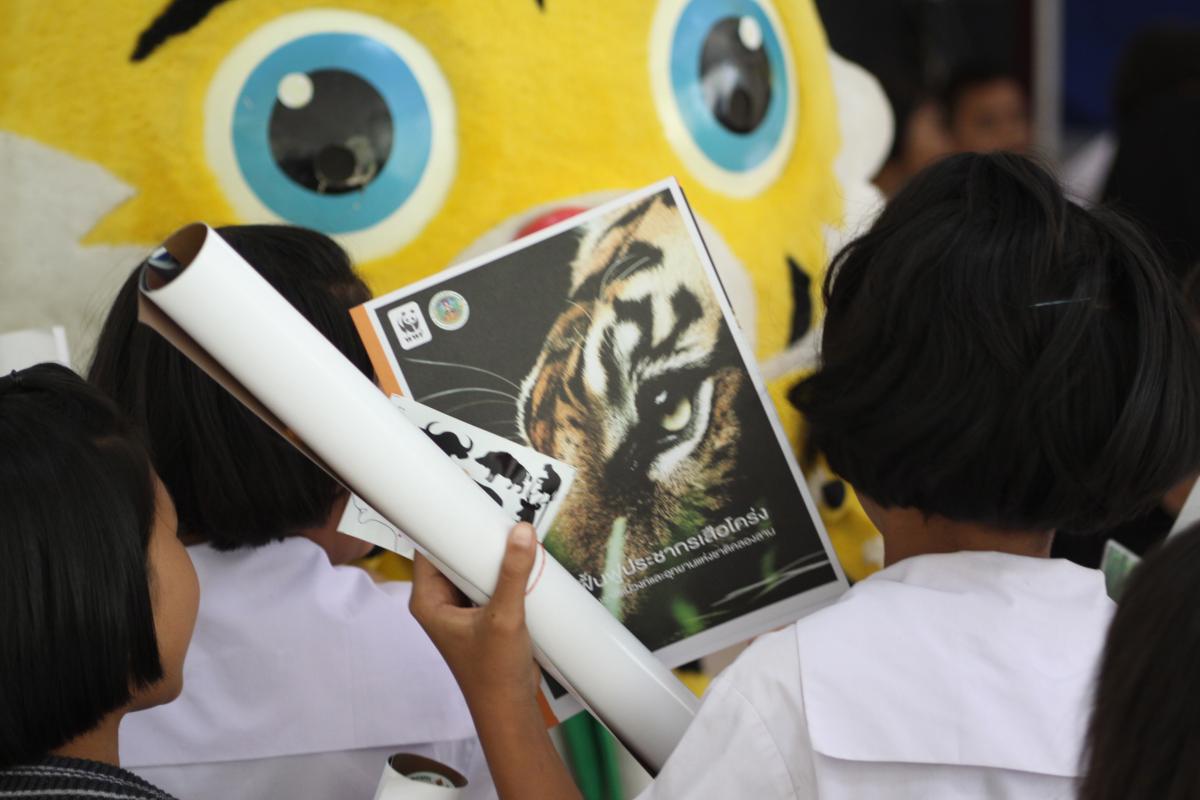 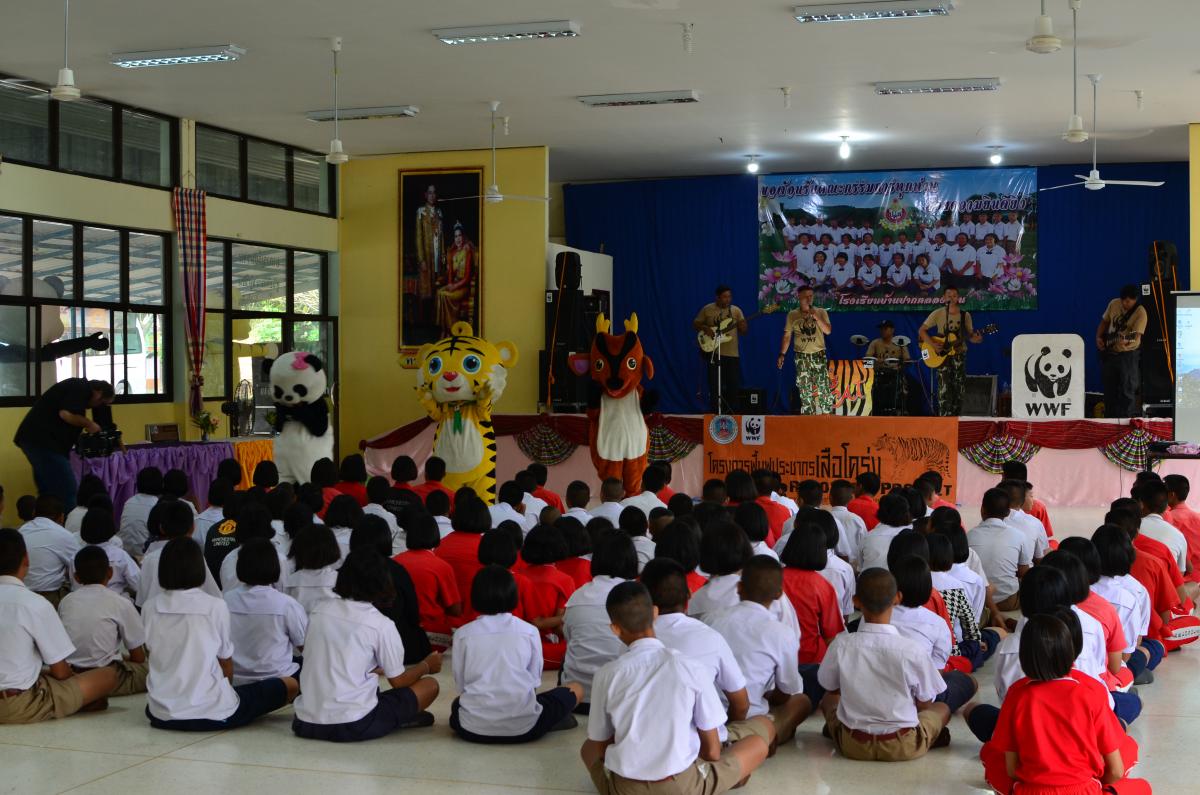 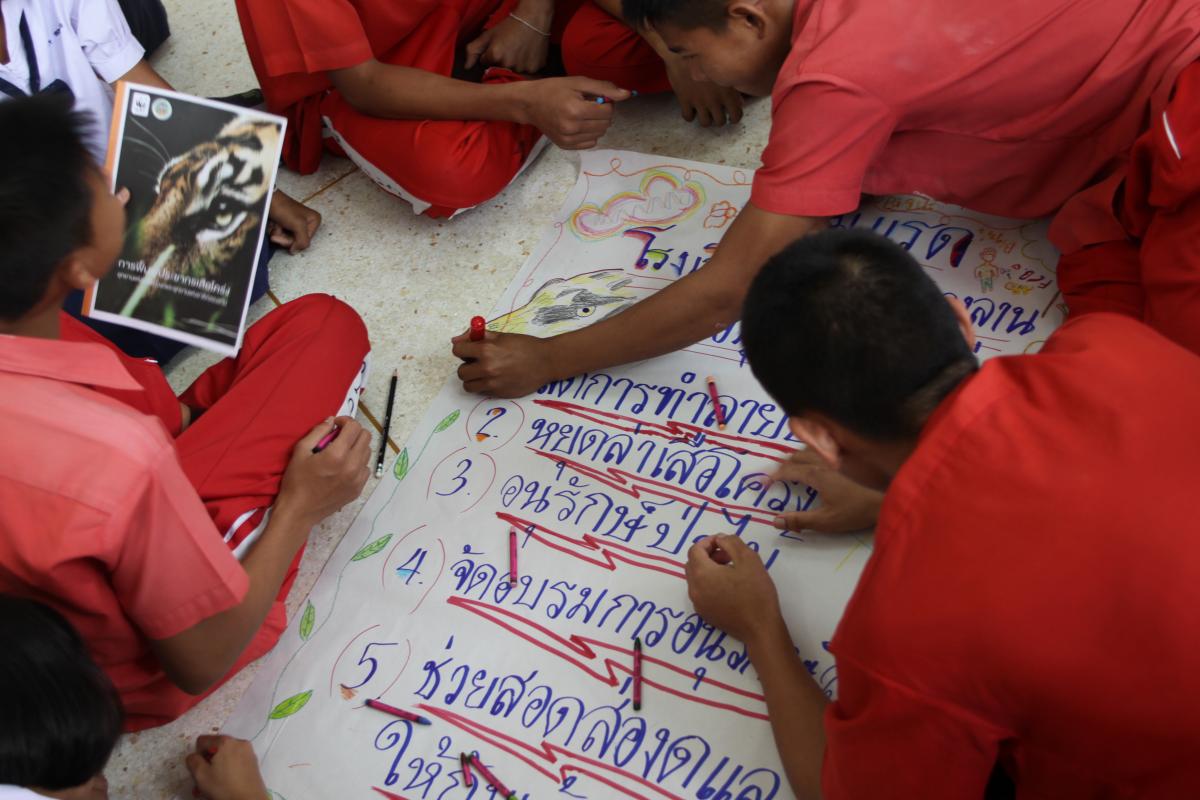 Awareness Training in a village and a school (© DNP & WWF Thailand)

As a third important measure to increase the number of tigers in the Mae Wong and Khlong Lan National Parks, the first release of breeding-center-raised bantengs into the wild took place in May.

The animals were first transported to the Salakpra Wildlife Sanctuary, Kanchanburi Animal Reserve, where after a six-week adjustment to the wild they were released. Several releases-into-the-wild will still be required to provide a significant increase in prey animals and the tiger population. This year, a first and necessary step was taken to provide for the survival of the beautiful and unique animal, the tiger. 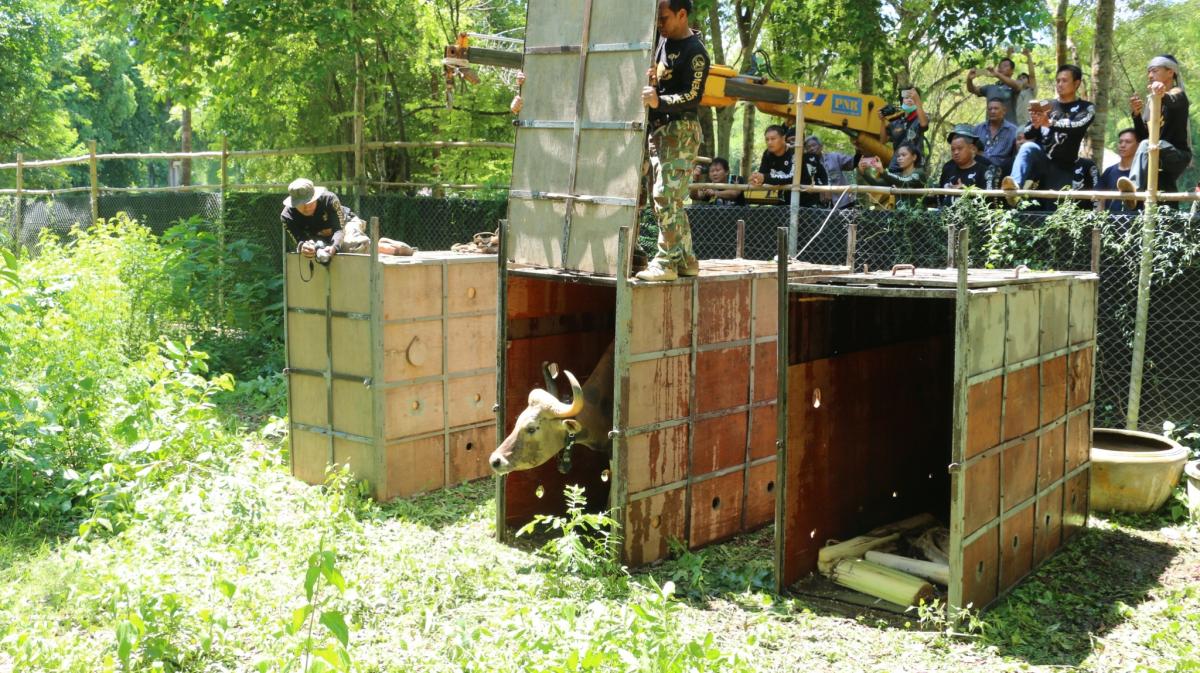 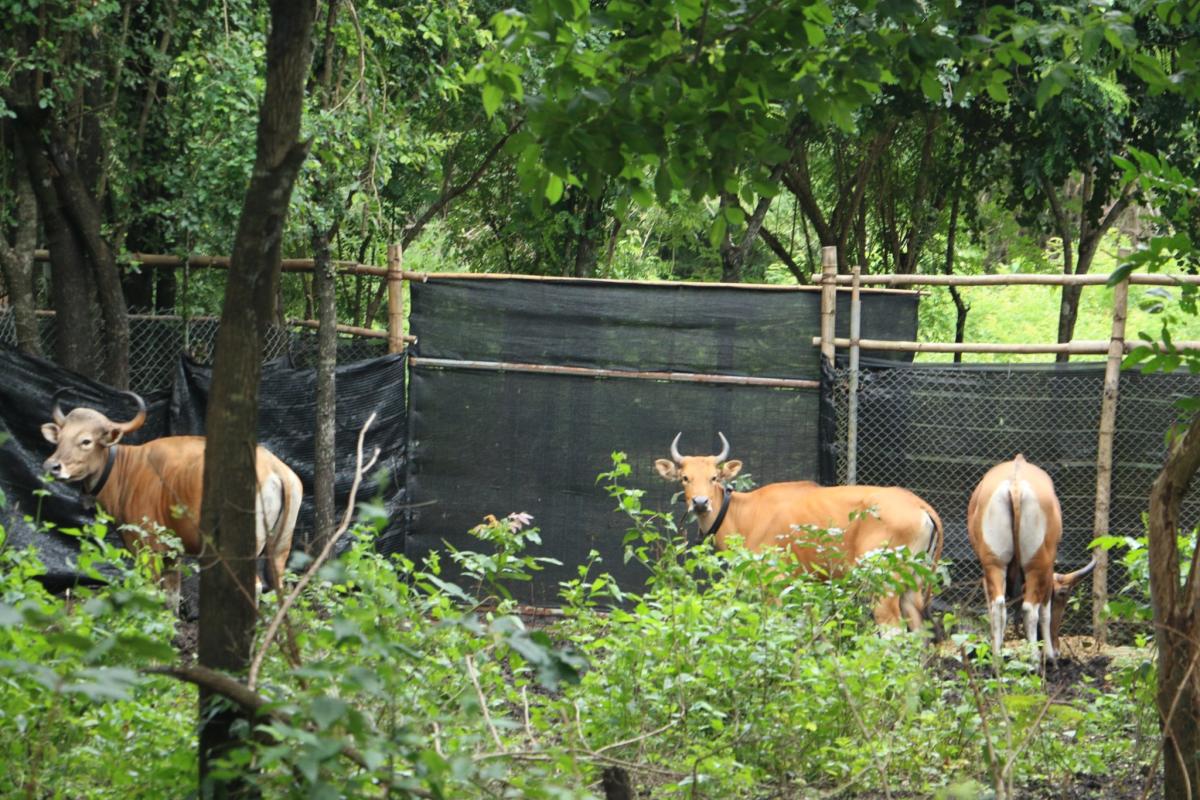 Release-into-the-wild of bantengs into the national parks. Before release, they are blessed by monks. (© DNP & WWF Thailand)

A momentous and successful 2018 now lies behind us. Also on behalf of the wardens, we heartfully thank all our supporters for your loyal patronage to tigers! With your help the A World for Tigers Foundation was able to provide for essential anti-poaching training as well as to supply 80 wardens with needed equipment.

Note: * The visit to Thailand and the National Parks was paid in full by private and corporate funding. 100% of all your donations to the A World for Tigers Foundation is used directly for tiger protection.